It has been so long since I posted, I've almost forgotten how to! I have been very busy since I got back from Korea and have just finished putting together a bumper edition of the IAPMA Bulletin, hope to get it to the printers by Friday and out to members early in December. As well as the Bulletin I have been working on the Valda Quick Biennial Paper Arts Exhibition which finally opened last Saturday and I have been teaching workshops, I just have three to go now. This coming weekend I'm down to Bairnsdale for a two day bookbinding workshop then the following Saturday beginners papermaking at the Stables at Bundoora then out to my daughter's school for a day papermaking with year eights, and both my beater and my washing machine are out of order at the moment, I'll have to get one of them fixed before next week or I'll have to use the blender on all the pulp or take a trip out to the Stables. In the last month I've also designed a binding for Papermakers of Victoria Year Book and run through with two groups. The binding was a variation of one I learned years ago from George Matoulas, the paper cover was made by Marianne Little and Barb Adams from mixed plant fibre paper and twenty four members of PoV made the pages. Each participant gets a copy and we have several which may be auctioned at a later date. 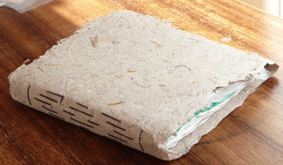 The other thing I have been doing in the last month is making invites for my niece's wedding and for my mum's 90th birthday. 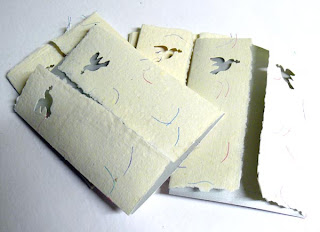 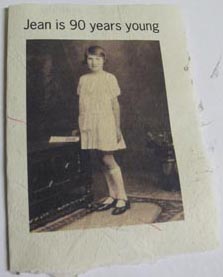