And an acrostic I'm working on

I have been doing classes at All Poetry and have been having a bit of fun, my poetry still isn't good but I think it might be getting better, the acrostic certainly needs work.

I have just about finished putting the IAPMA Bulletin together and after about a month on the computer I had a day off last week and went to the Melbourne show, I had a pretty good day and had lots of free tastings in the main pavillion (no wonder my weight was up for my Curves weigh in on Friday!), found out about Test drive the Arts and booked a free performance at the Recital Centre and avoided the licorice showbags, though I did taste some licorice. It has been some time since I've been to the show and I was disappointed with the book display, there were only about four entries in each section and my two small kozo books looked very lonely on the top shelf of the case, the winning entry was in the cabinet at the front with the best entries for each craft. In the art books it was my nest book that won, not the Byron book. Come on all you book makers out there enter your books next year and stop me always getting my money back!

It has been too wet lately to get outside so I haven't been doing much papermaking, anyway I have so much paper in stock I really should be using that up. I have started work on a series of vessels and here are a couple of my early attempts. 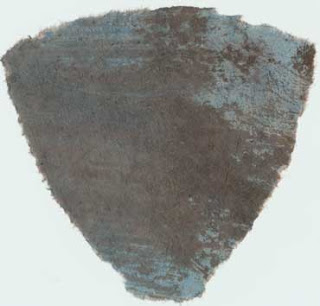 Indigo and walnut on Belgian flax paper, made in workshop with Amanda Degener 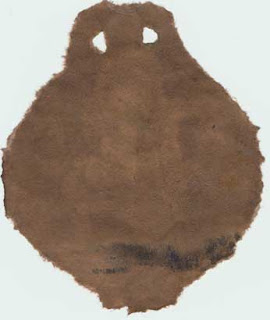 Cyanotype on hemp paper with drips of alkali.
Posted by Papergail at 9:27 AM No comments:

It has been so long since I posted here I've almost forgotten how. It is a lovely day today but I'm stuck on the computer, I would love to be in the backyard with my hands in a vat but I'm meant to be working on the IAPMA Bulletin and I will get back to it soon. It seems like ages since I made any paper or even made a book, I am itching to get creative. I seem to be spending more and more time on the computer, I've just enrolled in a Photoshop course too to improve my image editing skills.

I did get out last Friday with my friend Denise to a couple of exhibitions, the first was 'I saw and heard of none like me' at the Abbotsford Convent c3_contemporary_art_space the second was to Counihan Gallery in Brunswick to see 'Walk' an exhibition of works by eight artists inspired by the Great South West walk which is a circuit around Nelson and the Glenelg river in the south west corner of Victoria.
I enjoyed both shows particularily the work of Jazmina Cinnas, Deborah Klein and Rebecca Mayo from the first show, Jazmina does amazing linocuts with many colours. In the second show my favorites were Jan Learmouth, Vicky Couzins, Carmel Wallace, Ilka White and John Wolseley. John was the keynote speaker at the IAPMA congress in March this year, he's a very entertaining character and does amazing work. I was reminded of the holidays we've had in the Nelson area, a couple in Nelson itself and a couple camping on the Glenelg River at Wild Dog Bend and some other camps, it is a great place for a holiday and I have done some little bits of the walk, I've definitely got to old to attempt the whole 250k.

Since we were in Brunswick we had lunch at A1 Bakery and bought up big on Middle Eastern supplies, I bought some Konafa (shredded pastry), some Lebanese couscous, and some bourghal. I made the konafa with walnuts (and lsa) on Saturday and plan to make tabouli and kibbeh using recipes from the course I did years ago. Last time I was going to make tabouli I couldn't get bourghal anywhere near here and I never see konafa for sale this side of town.

I just found out that I got a first, second and third prize at the Royal Melbourne Show this year, I don't know which book got first, it was either my nest book which was in our show earlier in the year or a new book I made and finished just before delivery day. That book was inspired by a walk in the bush up near Byron and was photos and haiku on plant fibre papers bound with hemp thread and featuring a stick found on the walk. I haven't got photos of it or of the two books I entered into the Traditional Eastern Bookbinding section, I will try to remember to photograph and post once I get them back.
Posted by Papergail at 11:04 AM 2 comments: