I am currently organising a postcard exhibition for which I hope to receive lots of entries. The details are below.

My Paper, My Land
A postcard show will be held to coincide with the IAPMA Congress in Burnie, Tasmania. Works should reflect where you come from and contain at least 80% paper. The size should be around 10 x 15 cm and works should be sent through the mail, preferably with a postage stamp and postmark to Gail Stiffe, 11 Keltie Street Glen Iris, Victoria 3146, Australia.
The works will be exhibited in Creative Paper’s Gallery for one month including the congress time and will be for sale for $A20 each unframed. The funds raised will be shared equally between Papermakers of Victoria, Creative Paper, the IAPMA support fund and the Papermaking Village in the Philippines and unsold works will remain the property of Creative Paper Tasmania. All works will be documented on a website to be announced. Works can be sent any time between now and 1 March 2009, there is no limit to the number of entries anyone can send. Please indicate on your card if you do NOT wish it to be displayed on the website. Enquires info@gailstiffe.info.
Posted by Papergail at 10:26 AM 1 comment:

In response to Wendy's request for bigger images here are a couple, I'm sorry I've taken so long to get them up.
The first one (my favorite) has Reeves Brilliant Red and Jo Sonja's Harbour View background colour run down the page together then Jo Sonja's Island Sand background colour on top. 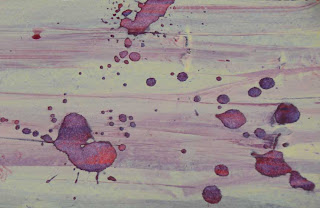 The second has Island Sand and Brilliant Red mixed together then run down the page then Jo Sonja's Rich Gold on top. 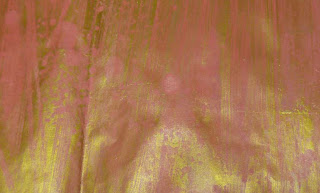 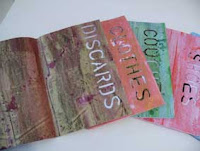 I have finally finished sewing the book for the Discarded Exhibition. Almost all the materials used came from Reverse Art Truck. The paper came on a large roll and I used the credit card technique which I heard about on Wendy's Blog and got the instructions from Kelsey. I did some with colours and gold and some with colours and off-white, I think I prefer the latter. My favorite pieces were done with red and blue swiped together then off-white over the top but they didn't end up in the book because I thought I might use them as end papers so cut one sheet in half then decided to go with plain endpapers. I have since made some brooches with this paper but I don't have pictures because I've already delivered them to The Alcove Artshop. 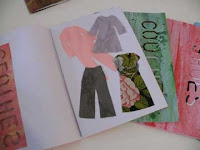 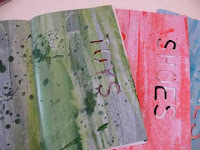 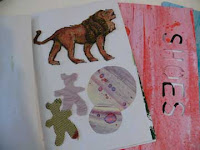 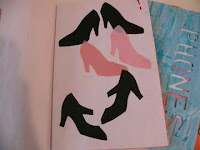 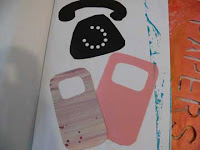 I cut the text out from the back of the sheet for each section and used leather and furnishing fabric for the cover. I used the exposed stitch binding described in an earlier post. 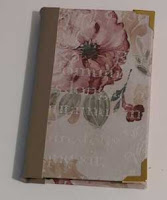 The exhibition is on in a week or two, I have to deliver on Thursday.
I've also done a couple of pieces for the Collectors Exhibition run by the Contemporary Art Society, The Exhibition is on from 5 - 18 May at Steps Gallery in Lygon Street Carlton.
The two pieces I've submitted for selection are Ladders to Fire 2008 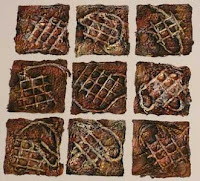 and Seduction of the Minataur 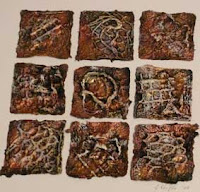 Both titles from Anais Nin an author I read avidly in the 70's and both works made up of smaller parts. I have been doing quite a bit lately with pattern, I enjoy the effects you can get by juxtaposing different elements. You saw some of these pieces in their raw state a blog or two ago.

I seem to be committing myself to lots of things at the moment, I just can't help myself - I do like to be busy! I am convening a postcard show to be held in Burnie as part of the IAPMA Congress there and helping to convene an International Paper Show in Melbourne and a Cyabnotype show with another paper artist at the same time. I've also said I'll be part of another project organised by M Squared and need to produce something before May then once a month after that. the words for this month are voodoo, phobia, fool and scribe.
Posted by Papergail at 10:24 PM 2 comments: