I tried the beater without it's cover and it was as quiet as a mouse. I can probably use it that way without too many problems since the beater itself is in a custom made cupboard and there is no danger of anyone getting their hands in the belt. I beat up some strelitzia that we had cooked up at the workshop down in Portland late last year. I combined it with the denim I'd beaten the previous week to make a couple of pieces that I've called 'An Exploration of Pattern in Denim and Strelitzia' and 'Another Exploration of Pattern in Denim and Strelitzia'. These two pieces are now in the Alcove shop at Box Hill Community Arts Centre. Some sheets I made where I laid strings diagonally across a denim sheet then couched a strelitzia sheet on top and vice versa then after pressing I pulled out the threads. I made another lot with a little bit of pulp painting and others I made by pulling a thread through the pulp then laying it across the square of paper and pulling the thread out. I prefered the effect I got with the strelitzia on the denim with this last technique. I used two small mould and deckle sets one about 5 x 5cm and the other around 8 x 8 cm. Apologies for the quality of the first picture I used my old camera and it must have been a bit too dark when I took the picture, at least the detail worked out pretty well. 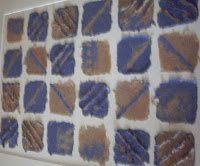 'An Exploration of Pattern in Denim and Strelitzia'

'Another Exploration of Pattern in Denim and Strelitzia' and Detail

I have decided to put two books in the Contemporary Art Society Show on Herring Island. The show is called Contemporary by Nature so I've decided to put in my 'Pineapple Book', which is made from dyed pineapple paper and my 'Magnetic Island Butterfly Book' made from kenaf and strelitzia paper and driftwood and inspired by the hundreds of beautiful black and turquoise butterflies on Magnetic Island. 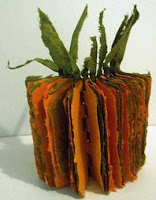 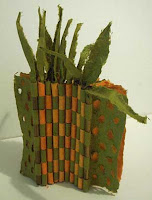 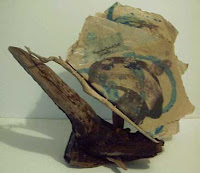 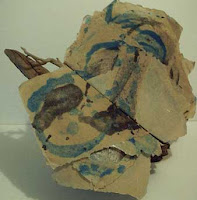 You are clever making that beautiful paper. And I just LOVE the pineapple book. It's amazing!!!

The colour in your pineapple book absolutely sings. The papers are beautiful - all of them.

Gail, do you mind if I tag you? Please only respond if you want to and or have the time. The info will be on my blog. Cheers, Carol

Your work is very inspiring.