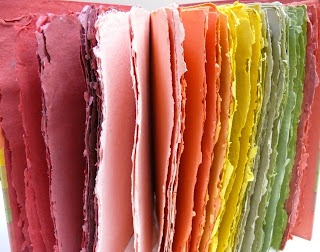 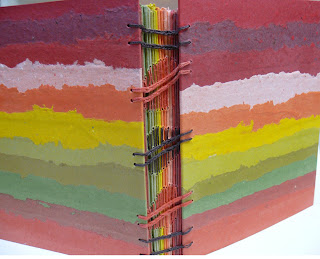 Opus 365 Autumn
My newest book part one of four.
It is over a month since I last posted, no excuses really, I have been doing a little. I went out to the Stables Studio on Wednesday to over-beat some red and purple ginger lily for a book project, no pictures yet, but the paper is a yummy colour. While I was there I met up withDaniella Woolf and team unpacking and setting up for the workshop for Papermakers of Victoria 'When Wax Meets Paper'. I had thought to enrol but didn't get my act together and was busy on Thursday anyway. I called out Friday afternoon to see what they'd been up to over the two days, there was some great stuff happening. Daniella is heading off today to teach at the Ballarat Fibre Arts Paper Forum, I'm not getting to that either though there are some great sounding workshops.
In the last month I have posted off the IAPMA Bulletins, prepared a Women's Art Register Bulletin, given a talk to the TAG group of the Embroiders Guild and had work in four exhibitions. I had one piece at 69 Smith Street Gallery when a room became available there and they put out a call to members, I took three newish pieces to the Alcove Art Shop for their winter festival. There was a piece of mine that had been purchased by the City of Whitehorse in their joint exhibition Ephemeral by Nature - Lasting by Design with Deakin University that was held at the Whitehorse Artspace, they even had a picture of my piece in the advertising. 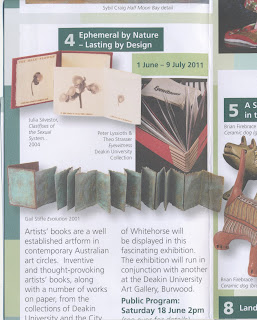 The other exhibition was as part of the BATS group (Boroondara Artists Travelling Show) a group of artists and galleries that will be having an open studios day on Saturday the 8th October. We were invited to be part of the opening celebrations for the Kew Courthouse Community Cultural Centre, I had a glass cabinet with a few of my books. I was planning to go to the big opening celebration but missed out because I woke with a screaming headache which isn't fair because we'd been to a 40th birthday party the night before and I was the designated driver, had one drink!!! grrr The BATS website above isn't operational yet, we each have to send in our images and bios but I thought I'd share with you the suggested promotional strategies.

Webmaster Dai proposes that the following activities should be undertaken twice a week:

* Email a newsletter containing an image of a recent painting;

* Post a 'blog with the same image (and an archive of all previous works) with an invitation to comment or buy the work using PayPal;

* Add to your Redbubble gallery;

* Add to your Saatchi gallery;

To quote Dai: ‘And that still isn't enough! Some would suggest that one should tweet every 30 minutes. Clearly they have no life.’

I am obviously not doing enough! I add to Facebook, update my blog once a month if lucky, update my webpage about twice a year (must do that more often!), don't have redbubble and haven't even heard of Saatchi! I have resisted Tweeting and would rather only email my mail list occasionally.
I have a friend coming over on Monday to learn a bit about blogging, Etsy and Facebook so I thought I should do a bit of a practice.
Posted by Papergail at 10:08 AM