I have just realised I've been blogging for just over a year. Time for a birthday cake! Speaking of cakes I've got a few things on my plate at the moment and more to come. Right now I've got the IAPMA bulletin to get out and it looks like being a beauty, I've had a lot of submissions and offers of samples, now I just have to do the hard yards. 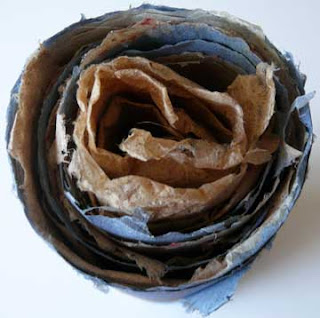 I am helping to coordinate this year's Papermakers of Victoria exhibition which will be called It's only a Paper Moon and I guess I'll be making some new work for it. I've also said I'd coordinate a postcard exhibition to coincide with the IAPMA Congress in Burnie (March 2009), watch this space I'll be putting out a call for entries before the end of this month. I might also be working with another artist on an exhibition on Cyanotypes and handmade paper, we had a meeting with the director of Photospace gallery last Friday and she liked our work. Last but not least I'm on a small committee looking at running an exhibition and workshops in March 2009 again to coincide with the IAPMA congress in Burnie.

Our small group from Papermakers, yabbers, are meeting at my place on Wednesday and have decided to have a challenge and make a postcard each month using a different technique (we're getting ready for the 2009 exhibition!) This month we're going to sew on paper and I decided to make mine on the theme of International women's day since it was this weekend. I found some old photos I'd taken of IWD marches from the 1970's and one of myself from about that time wearing the Tshirt I'd batiked with the women's liberation symbol, I also found one of my mother with a group of female friends and thought I should include one of my daughter so we can have the three generations on the postcard and the three colours of IWD, white, purple and green. I dyed some paper I'd brought home from Korea and have used Korean paper I'd felted as a base for the cards. Once they are finished I'll put up a picture. But here are the photos I've used as the basis. The photo of me was taken when I was in India and is as skinny as I've ever been.

Posted by Papergail at 6:18 PM