At last I have finished the first in an edition of three books which I've called Child's Play. I have been thinking about this book for several months. It started with the book I just called 'Piano' which was made as part of a series of piano hinge bindings and used some wide coloured icypole sticks with holes which came with other sticks that fitted into the holes. The pages were various examples of antiqued paper that I'd prepared as part of the class I taught last year at the Geelong Forum. I found the recipe on the web here http://members.optusnet.com.au/vanviola/paper.html
Here is a picture of mark 1 'Piano' 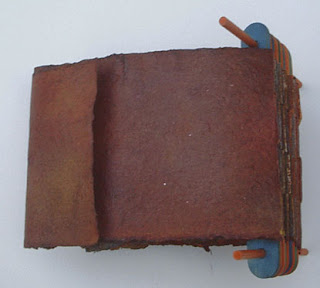 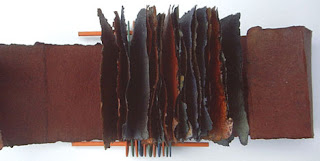 My intention had been to use the same type of sticks for the new books but I wasn't able to find them again so I had to settle for narrower longer coloured sticks. I won't run out of those since I bought a giant packet from Zart Art. Since I had decided to make an alphabet book I needed 14 sheets for each book. I made thick A3 sheets and used up lots of pulps that I had around including some the remains of the white paper with seeds and flowers that I'd made for wedding bonbonerie, denim and some green cotton that I made from the remnants of faded, rotting curtain lining which Katy had dyed. The sheets ranged from white through green to blue. I then painted them all with rabbit skin glue and instead of using wax as a resist I sprayed on some bronze acrylic paint and once that was dry sprayed with a range of paper dyes. I did half the sheets warm colours, red, yellow, orange and the other half blue and green. I then gave each sheet a coat of thin shellac. The sheets in the pictured book were not treated any further but one third of the sheets I rubbed brown shoe polish on and gave a further coat of stronger shellac. It took me ages to come up with children's games/toys for each letter of the alphabet but I got there eventually with a little help from my daughters. Then came punching all the holes. I arranged the chosen words in publisher and printed them out so that I had half an A4 for each game. I then used my Japanese punch to punch out all the words, it took me nearly a week because I could only do a few pages before my arm started to ache and I've still got 2 books to go. 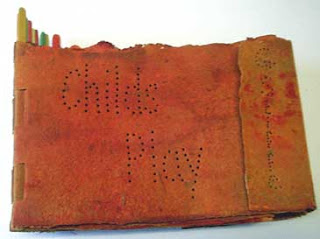 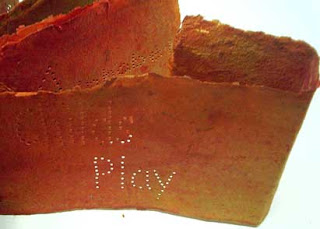 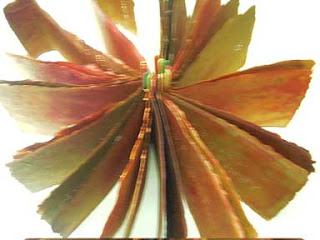 Posted by Papergail at 9:25 AM