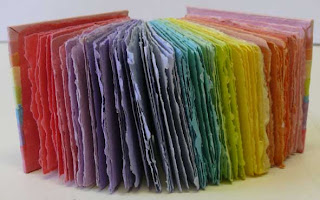 We spent a day at Yabbers a while ago making this rainbow paper. Beverley had prepared about 20 icecream tubs of recycled archival board that she had dyed different colours and we had three vats going at once. One started yellow and ended up blue, one started pink and ended up yellow and one started blue and ended up pink.
We are going to put the books, which are miniature (7 cm cubed), in the Valda Quick Biennial Paper Arts exhibition which will be held at the end of the year in Bundoora. Each of us will be doing a different binding.

Last week at Yabbers we worked through Keith Smith's instructions for Greek Binding, I chose to use five different coloured threads to go with the rainbow look. Most of the thread is some hemp that I bought at Victoria Market a couple of months ago. It is described as beading thread but it is really too thick for most sewing. I have found that it splits quite easily and for this small book I used four strands which I waxed so that they held together well. This is such a clear photo of the stitches you can see that I got a little lost with some of the overlapping stitches in the middle.

Since last week I have been doing some preparation for the class that I'm teaching at the Geelong Textile event Fibres Geelong. The class is called Brazen Breastplates and the subtitle is Colour and Texture in Handmade Paper.
I have made a whole lot of textured samples and have started some of the treatments on them.
I used some of the red paste paper to cover my sample for the bookbinding class tomorrow, a W Binding or binding onto a concertina. 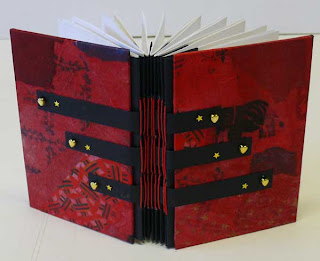 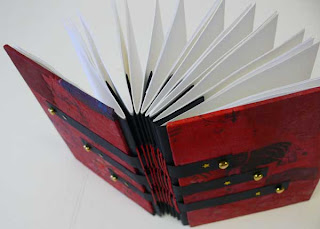 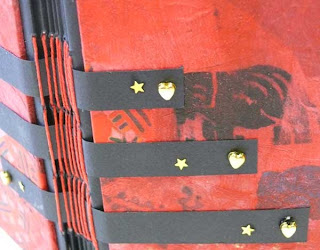