I pinched that title from Samm's blog but I like it and it seems very appropriate at the moment. For one thing I'm reading Tim Winton's latest book called Breath and enjoying it, Mike got it for his birthday but I snaffled it to read first, he did start on another book, so I didn't pinch it from him really. I just discovered Samm's blog last night and insted of reading all the other emails I read her blog. The other reason it's appropriate is the usual reason so much on my plate I'm doing none of it.

I spent the last two days at Geelong Grammar School teaching as part of a three day arts event for the year tens. I had two groups for two sessions each and we made paper then made a leather journal. The first class took an hour longer than alloted for the journal then stayed on to decorate. I started the second one off earlier on the books and they JUST finished them in time. After two days away I have sooo much to catch up on just with emails and on the computer. Now I need to prepare for tomorrow's Papermakers meeting where I'm the main event giving a framing demo. The hopes were that we might encourange some bigger framed works for the Papermoon exhibition which I'm helping to run in July.
I've been telling people they don't have to be literal with their contributions but there I am going to make a book on the phases of the moon. I'm calling it Time and Tide and I am still working on the binding. I made some sheets of hemp paper at the Papermakers work day the other week and have used it for cyanotypes. I started by cutting shapes from card and using them to mask the cyanotype. 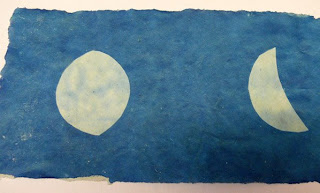 Then I added some cotton which I've had for years intending to make paper from it. 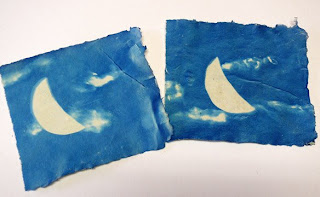 I still wasn't happy with the result so then I cut the shapes from some thick clear plastic. I used my double sided tape to stick two pieces together and smudged a bit of paint in between. I'm much happier with the last lot so now to turn them into a book! 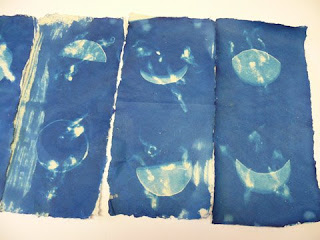 Hi I discovered your blog thro papermaking group. I am new to papermaking, but I love your work on Time and Tide - very inspiring! Stephanie sjmdistantstitch.blogspot.com

Hi I discovered your blog thro papermaking group. I am new to papermaking, but I love your work on Time and Tide - very inspiring! Stephanie sjmdistantstitch.blogspot.com