I'm just recovering from two days of teaching 3 and 4 year olds to make paper. I've put in pictures of the paper from the first day drying in my shed. I made A5 sheets with the 3 year old group and A4 with the older group. They all made three sheets, one plain, one with stencilled foot or paw prints and one with a hand print. All bar one child made their three sheets, many of them unassisted. By the end of the second day I had everything going swimmingly, I had only one helper so split the class into four groups of five or six each child had a name tag which they placed on their last sheet. I had six couching beds and left the sheets in place until all of the children had finished then I picked the stacks up and put them in the press all at the same time, calling the children back to see the water being squeezed out. In the previous sessions I picked up all the sheets after each group had finished and made the children wait while I pressed the sheets, they did like to help turning the handle of the press but it worked much better if they could just make their three sheets then go inside to do something else. Something else I streamlined over the two days was that first I was giving the children a choice between a hand print and a foot print but it worked out better if they did one of each but swapped the colours of the base sheets and second sheet. 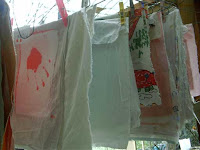 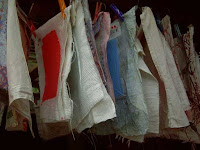 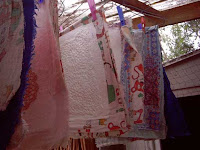 I was totally whacked after two days leaning over low tables. Hence a morning sitting at the computer before I get stuck into my next project which is making some special cards for one of my neighbours. One pastel, one bright and one with plenty of bling, lets see how I go.


Then a visit to my mum via refilling my gas bottle so I can finish cooking fibres for the workshop I'm running next Saturday in Portland (about 4hrs drive from home). I found out last Friday that there are 15 enrolled in the class so I'll need plenty of fibre.
Posted by Papergail at 9:44 AM