Today I did an interview for a new TV program for Channel 31 called Blurb. It is planned to air early in November at 7.30 pm on Monday nights. I had taken way too many books but we got to look at a few in detail. I'll have to find someone with a video player to tape it for me. I also took my books to the show which opens on the 20th September. I must try and go this year since I've missed the last couple of years and they've made some big changes to the showgrounds in recent years.


We've got yabbers here on Wednesday and the plan is to beat up some hemp. I've started with one batch but have been having awful troubles. It started when I beat up some samples of curtain fabric which were described as being 93% cotton and 7% linen. Well they eventually formed some type of pulp but I had to constantly stand at the beater to help the fibre around. Now I've started on some hemp and although it is rotating properly it is constantly getting jammed unless I have the roll so high it doesn't do anything to the fibre. The pictures show the chopped up fabric and the state of the pulp now. I have been attacking it with scissors from time to time but don't have time to stand all day chopping. I need to put on my editor's hat and get on with editing the IAPMA bulletin. (http://www.iapma.info/) I think it will be a good one this time as I've got some interesting pictures and stories. 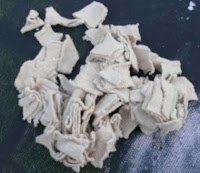 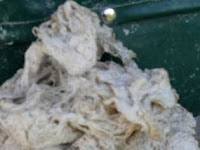 Posted by Papergail at 1:17 PM