I notice it is almost two months since I last blogged. I have been thinking lately that I have been spending too much time working for and promoting other peoples practices and not enough on my own. I have been spending a lot of time helping with the organisation of the next IAPMA Congress that is happening in Fabriano Italy from 1-6 July. And yes, I will be attending and having some holiday time in Paris, Amsterdam and Rome before the congress.


These two pieces will be exhibited as part of the member show in Fabriano, they are on their way to Italy now, I have my fingers and toes crossed that they'll arrive safely. Back in 2000 the work I sent for the members show failed to arrive. Three of the boxes arrived back in Melbourne in January 2001 and one was delivered to the Tuscany address a couple of months later.

This dress is currently in Jeonju Korea but due to the ferry disaster there won't be shown until some later date. All public events have been cancelled or postponed. 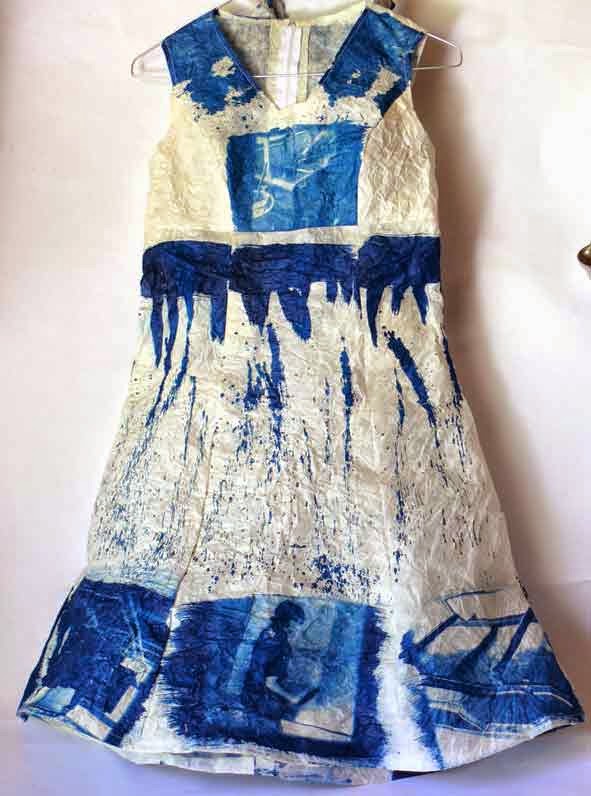 I have made a few journals lately including a new series of Melbourne icons. It all started when I made my daughter who is currently living in Netherlands a cardboard Christmas Tree and Vegemite jar ornament. Since I had the photo of the Vegemite jar I put it on the cover of a couple of books but they were deemed to breach copyright so I started again with some Vegemite on toast, lamingtons and twisties. They in turn led to using photographs of some Melbourne landmarks, The Skipping girl and Luna Park.

These books are currently available at Open Drawer and The Alcove Art Shop, not on Etsy yet.
Posted by Papergail at 11:06 PM

The cyanotype book and dress are so beautiful!!! Great work and continue with the blog.