sewing frame and cradle in one


At Yabbers on Wednesday we had a great gathering and tried out my workroom for the first time fitting nine of us in without too much trouble, well it was a bit squeezy if anyone wanted to move around. Tricia had sourced some instructions for making a sewing frame from an encyclopaedia so we started the day by making a frame each. I have just found out that the book it came from was Making & Keeping Creative Journals by Suzanne Tourtillott. It was really quite simple, it just involved cutting a window in the cover of the book and using clamps to hold it open and to hold the cords taut. 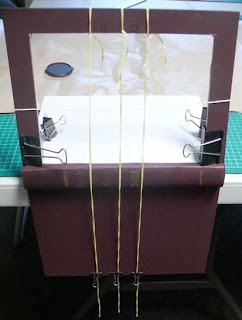 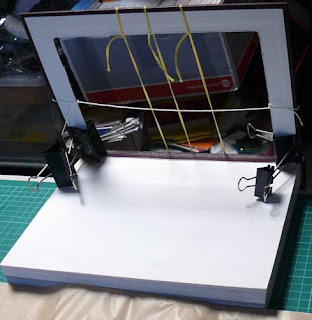 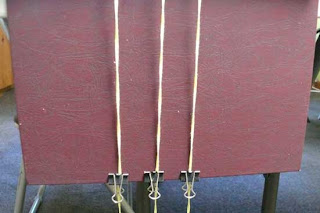 These pictures give you a good idea of how it works though I am getting a bit frustrated with the new editing in the blog, I want to move the pictures around but am having great difficulty so I'll leave them all down the left. 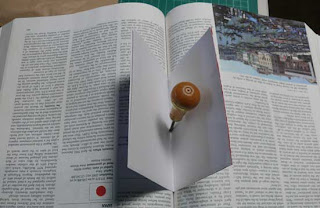 Before you set up your sewing frame you can use it as a cradle for making the holes in your sections which makes this piece of equipment very useful.
Here is the sample book sewn but no covers yet. 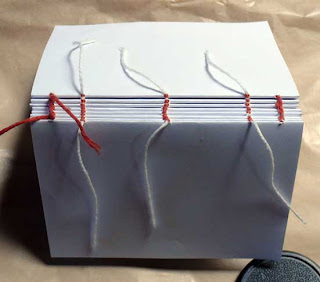 After a late lunch we tried out backing silk with paper following the directions given by Dineke McLean at the Papermakers of Victoria meeting last Saturday. Ursula had brought along some pieces of silk that she'd dyed so we tried that out and backed it onto some shoji screen paper that I'd bought on Monday. 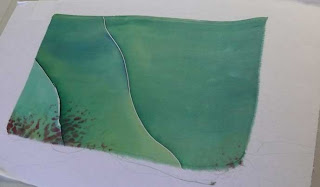 The silk is pasted to the paper which was pasted to a sheet of perspex so that it would dry flat, I fully intend trying some more myself but will definitely start small because I suspect it will take a bit of getting used to manouvering the wet paper onto the cloth with only two hands, we had at least four on Wednesday.

I have spent the rest of the week framing up some A2 pulp paintings at Do Your Own Framing. I did their course about five years ago and tend to do most of my framing at home using Ikea frames and cutting my own mounts but these ones were very big so it was much better to do it there and use their equipment and benefit from their expertise. Now I must get back to editing the IAPMA Bulletin.
Posted by Papergail at 11:22 AM

Hi, Gail! I think I'm what they call a lurker (not to be confused with stalker, which is creepy!)

I'd be interested to know what paste you used to back the silk.

Hi Gail, that is cool. I like the look of the encyclopaedias frame. They come in handy don't they? I just sent you a sourse of the book I got the idea from. You can always add the info on later. I learned something from this post. Using the encyclopaedia as cradle for making the holes in your sections! Thanks for that - Hugs Natima

Thanks Dinah and Natima, I have included the reference to the book, even found it on Amazon, I might have to buy a copy myself!
The paste we used was straight cornflour with a little tee tree oil added for insect repellant (Dineke used oil of cloves)

Learnt this hot tip from a demonstration at the Canberra Craft Bookbinders Guild and I have used it many a time and have found it works perfectly.

Dowels can be difficult to transport the pasted paper to the fabric. Try using mylar as an alternative. Place paper on to a piece of mylar which is a least 1cm larger all round and paste ready for adhering to fabric. Using this method the paper sticks to the mylar on its unpasted side. You then pick up the mylar with the pasted paper attached and transport to the fabric. Use the same method of application and then peel off the mylar.

A mermaid in the attic said...

I recently bought some lovely recycled sari pieces from Fiona Wright at 'Glitzandpieces' on Etsy, and I was amazed by the envelopes they arrived in. All had been carefully backed with patterned silk and folded and glued by hand. I imagine they were pasted using something similar to your cornflour recipe. Definitely worth recycling...inside out!

P.S. I haven't forgotten your books Gail! Just a bit snowed under at the moment! :)

Thanks for the tip Vicky, Dineke used a pair of steel rulers but I like the mylar idea, in fact you could probably restraint dry on the mylar.
There's no hurry for the books either Christina, they were sitting in a cupboard here for many years.