The winners of my OWOH giveaway were Barbara, Morgan and Regina all from the USA, I'll be sending off the prizes in the next day or so. Congratulations ladies! I was very lucky myself, I didn't get around to very many sites but I won Wendy Shortland's Anne of Cleves. I plan to continue my tour through blogs of those who kindly left comments on mine, I just got snowed under and only viewed about half.

I ran a workshop for the Calligraphy Society of Victoria last Sunday which went very well, it was basic Oriental binding, they've asked me back to run another one later in the year on one of the two books of mine that were in Eco Books, the exposed stitch with fabric covers and leather spine.

I am also preparing for two workshops later in March, one in Sydney and the other in Bairnsdale. The Sydney one is a repeat of the armature workshop I did for Papermakers of Victoria last year and the Bairnsdale on a variation on that without the papermaking aspect so I've decided to include some lightshades ala Helen Hiebert, I've made some models using unrushi that I'll be supplying to the class and one from cyanotyped hanji. 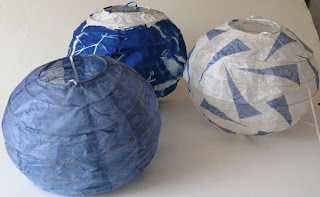 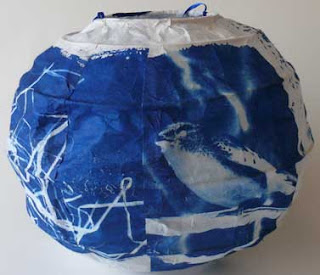 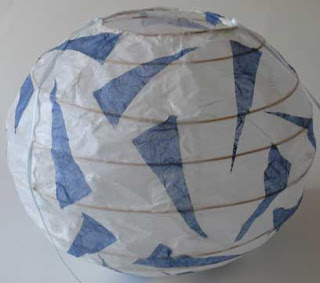 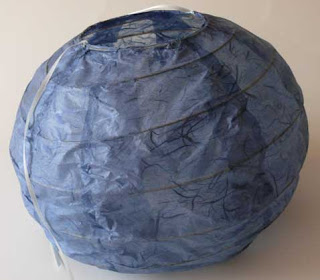 I seem to have a bit of a blue thing going on here, not sure why except that the blue and white unrushi were cheaper than a lot of the other colours and I figured my first one should be the most expendible. I used straight EVA (like PVA glue) on the blue one and feel that you can see it through the paper so for the white I mixed EVA with cornflour paste and it is much less obvious.

I have also just about finished the A2 pieces I showed wet in my last post, they dried a lot paler so added some black later to boost up the shadows. I did two of each though I haven't finished the second craypot picture. My two cormorant pictures ended up with the horizon in different places so needed the birds different sizes here they are. 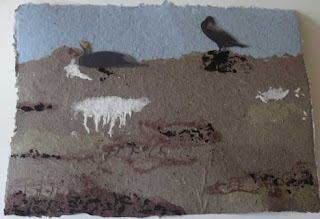 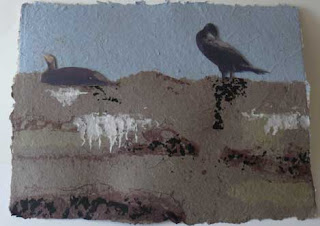 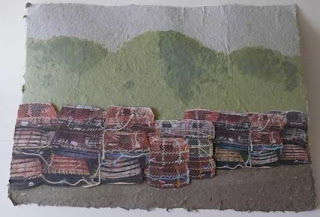 I love these blues that you use. You did some itajime books with blue some time ago and I loved those too.
Going to the post office with my giveaways tomorrow - they're packed ready to go.

Thanks Cecilia and Wendy,
I'm looking forward to my goody and Cecilia it's not that much, I'm sure you do at least as much as me, I just write about several weeks of work in one go.

Love the cormorants and the craypots, wonderful colours. Your blues are really nice, I like that ethereal look.