The armature workshop the weekend before last went really well, two days of play with kozo and cane. We made shapes, covered them with gauze then dipped them in a vat of kozo, a technique I learned from Catherine Nash back in 2000 in Tuscany. Pictured is the one I made in the workshop, I dipped it again when I got home then carefully peeled off the fabric once the paper was dry. 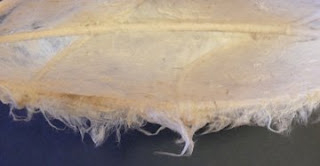 During the workshop we did the whole preparation of the kozo from cooking, through washing to beating then Japanese style sheet forming. Most of the morning of the second day was taken up with beating, there were a few sore arms after that. We set up a temporary vat and made sheets which we separated by just a thread in the Japanese style. After a slow, fairly short press with a board and a slowly filled bucket of water I brushed some sheets onto a large pressing board at the Bundoora studio, I took the rest home and rolled them onto fibro cement sheet. I have now torn each sheet into 16 pieces for the next edition of the Deckle Edge (Papermakers of Victoria newsletter). Each workshop participant took home a ball of kozo, myself included, I made some up yesterday to make books for the Melbourne show, I have entered two oriental books, now I have to make them.
Last week was pretty busy after the workshop I went into work to do the tax on Monday, Tuesday was Women's Art Register, Wednesday the Alcove Art Shop, and Thusday I gave a talk and show and tell at Ivanhoe Library, Friday I cleaned the house and prepared for dinner guests, Saturdaywe went to the Dali exhibition and spent nearly three hours there, what a great show and diverse work.
This week I'm catching up on creative stuff, I actually have three days in a row where I can work and as long as I get off the computer I will get a bit done. Yesterday I made some cards using the black card that was given to us by the printer at Bundoora and I bound one and a half books. I also made some kozo and recharged the indigo vat to dye some thread and some kozo pulp, I intend to make some cloud paper with indigo and plain kozo. Today I plan to make some paste paper and do some more indigo dyeing. At my talk last week one of the participants brought in some of the books she'd made, she attends classes with Rae Cummings at Panton Hill. One of the books had a cover of paste paper where the paint used was one of the Lumiere halo colours. I have some pots of that so thought I'd give it a try on the black card. It looked very stunning on the book and I think it would look good on cards. 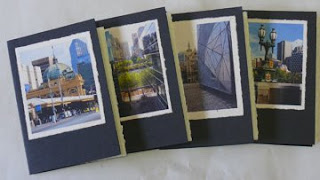 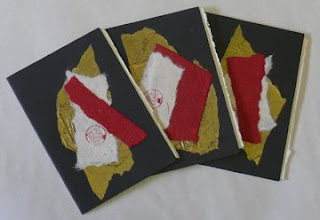 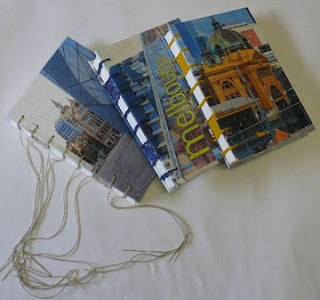 The books are a series of Melbourne books using some of the photos I took while preparing for the Shared Journeys workshop earlier in the year. I decided to use some of the images for cards too. I have chosen to use a combination of Celtic and Coptic to bind the journals, I like the way these bindings look and how they open flat.
Posted by Papergail at 8:41 AM

3 days to "create"...needs to be on my wish list Gail. Love what I see and read here. Jo xx

Thanks Jo, doesn't happen very often around here I can tell you.

So much to take in Gail. As a non-paper maker it all seems fascinating and very inviting. You always inspire me with your myriad activities - maybe one day I'll make it down south for a paper making class.

Anonymous said...
This comment has been removed by a blog administrator.
December 4, 2009 at 8:29 AM

Hi there!
I would like to burn a theme at this forum. There is such a nicey, called HYIP, or High Yield Investment Program. It reminds of financial piramyde, but in rare cases one may happen to meet a company that really pays up to 2% daily not on invested money, but from real profits.

For several years , I earn money with the help of these programs.
I'm with no money problems now, but there are heights that must be conquered . I make 2G daily, and my first investment was 500 dollars only.
Right now, I managed to catch a guaranteed variant to make a sharp rise . Turn to my web site to get additional info.